Xerocon 2019: What’s new in accounting technology and what does it mean for London’s scaleups? 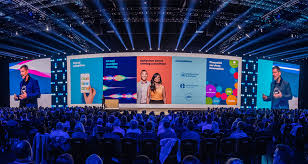 This November, Quantico made the trip to Xerocon, Xero’s conference for cloud accounting leaders. Here is a review of what we saw and the insights we gained.

If you run a startup or scaleup, you probably already know about Xero... It’s the number one accounting software for small businesses. What you may not know is that every year, Xero stages an event in London, Xerocon. It’s a great place to go to find out what is happening in our industry. As well as finding out what is happening at Xero, visitors also get to find out about other great finance-related tools, all growing their user bases by utilising Xero’s open API.

In this article, I want to tell you about my visit to Xerocon 2019. I’ll walk you through the new developments unveiled from the stage, as well as give my thoughts on what Xerocon says about Xero and the state of accounting technology for scaleups in 2019.

Let’s begin by recapping some of the announcements Xero made at Xerocon, mostly delivered by CTO Craig Walker. Many of these announcements centred around Xero’s work with its partners:

Xero is introducing a new feature to allow recurring payments via Stripe on invoices raised through the platform. This will allow payments to be taken automatically on certain invoices.

Xero also revealed a new integration with TransferWise, which will allow invoices to be bulk paid by TransferWise, directly from the Xero app. This will be a paid feature, in addition to TransferWise’s standard fees. It will be available as a pilot from February 2020.

While it was great to find out about these new integrations, which will certainly provide value to some users, news of other truly original developments was thin on the ground.

At Xerocon 2018, Xero announced that it had acquired Instafile and Hubdoc. This year, the first announcement was Xero Tax, the new name for Instafile. The next was Hubdoc! The potential of these acquisitions is high, but Xero seems to have made very little progress with them during the year that has passed. Anna Curzon, Xero’s Chief Product Officer, announced the Xero Tax beta, but again, we knew about this last year.

Even the Stripe integration, mentioned in the section above, performs functions you could already do using Xero’s existing integration with GoCardless. You could even say that Xero is treading on the toes of a key partner by sidelining GoCardless in this way. It certainly seemed a bit awkward when they demoed the GoCardless integration later in the presentation, seeing as it had been a feature for a very long time.

AI was a bit of a buzzword at Xerocon, as it is at many industry events at the moment. However, while Anna Curzon talked at length about AI and machine learning, it was always in relatively vague terms. There were no specifics on display. Xero has certainly made no attempt to apply these tools to automating month-end, a feature which users are crying out for.

Has MTD slowed Xero down?

It was clear that Xerocon 2019 lacked a bit of the pizzazz of last year’s event, with its news of company acquisitions, new products and features. When one of Xero’s biggest announcements is that they have opened a new office in Manchester, you know it has been a slow year.

I have some thoughts on why progress has been relatively sluggish at Xero in 2019.

Making Tax Digital will have diverted a lot of resources away from developing the core product. Let’s not forget, this wasn’t a change Xero asked for; it was foisted on them by HMRC. 2 million VAT returns have now been filed via MTD. This will be seen as a success for the project, certainly better than most HMRC critics predicted.

It wasn’t just the awkwardness of the GoCardless demo; I definitely got the impression that Xero is changing its strategy regarding their app partners.

Xero became number one in its field for two reasons.

For many years, Xero cultivated a strong relationship with app providers, which resulted in great business for both sides. Now, however, it seems that Xero is determined to change direction, even stepping on its third-party app partners’ toes.

For example, Xero Snapshot and Xero Cashflow look like really good tools for reporting, except they both appear to be copies of other third-party tools that have done well in the Xero ecosystem.

Hubdoc, acquired over a year ago by Xero, was a big focus of the talks on Xero’s future growth. Yet, the largest stand in the exhibitors’ hall was from ReceiptBank; a direct competitor to Hubdoc.

Xero made announcements about Xero Expenses, but these features are in direct competition with Expensify; another tool that has done really well in the past by collaborating with Xero.

By replicating its most successful partners’ products, is Xero on to a winner, or could this be the end of what made it great?

I also hold the view that by focusing on replicating third-party apps, Xero is missing the opportunity to truly improve the core product. Xero could be so much better than it already is, if it focused on doing what it does, but better.

Gary Turner, Xero’s MD for EMEA, talked about building software that makes it easy to do business. Those are great sentiments, but they are not shared by my clients. The fact that my clients have to ask me to set up reports for them is a clear sign that Xero is not easy enough to use.

If Xero just made a few small improvements, it would be so much better. Currently, if you create two P&L reports and you want the same mapping, you have to set the second report up from scratch and they don’t auto-update. Is that so hard to fix?

Where is Xero’s focus?

Another observation from Xerocon is that Xero might be shifting its focus away from scaleups altogether.

During presentations, all of the client examples Xero displayed on the big screen were small businesses. All of the language Xero used was tailored to small and microbusinesses; the kinds of businesses that employ fewer than ten people.

Larger scaleups clearly are not their focus. As someone who typically works with businesses of between 40-80 people, this is a shame. Scaleups remain stuck in the no man’s land between Xero and more expensive ERM tools. It’s similar to the situation in banking, which I have previously written about on LinkedIn.

Could this be because Xero has reached a different, duller stage of maturity, now it has more than 500K subscriptions in the UK alone?

The state of accounting tech in 2019

What does Xerocon and my impressions of it say about the state of accounting tech for scaleups right now?

While the app market for finance tools is incredibly overcrowded, the market for accounting software remains somewhat uncompetitive. Presumably, this is because of the burden of being compliant with tax changes across multiple jurisdictions.

In this slow-moving market and despite a few criticisms, Xero remains the best choice for scaleups and SMEs. It’s still incredibly well-priced considering the value it provides.

As for me, I had a really interesting time at Xerocon and I’m glad I went. Sure, it was a bit more low-key compared to last year. As well as a lack of big announcements, there was no zip wire and no fancy floating hoop seating area! It’s interesting attending the same event a year later. The event is the same, but my take on it is different.

However, it’s important to get out of the office from time to time and reflect on what’s going on. I felt guilty about coming rather than spending time with my new team members, but it was good to have that time to focus on what’s changing in the industry. Last year, if anything, it was too easy; this year it was tough to carve out half a day to attend.

If you’re a talented accountant looking for an exciting new challenge, it’s time to talk to Quantico. To find out more about becoming a Quantico Financial Business partner, visit our site today.